Despite so many in financial hardship cat lovers enabled us to feed our Cretan cats as well as treat them. Your generosity bought over 1,500kg of dry food distributed to villagers in need & dedicated volunteers feeding local colonies.
The reason we rescue these gorgeous creatures is often lost to us in the mire of hostility/pettiness that invades animal welfare. Catherine kindly agreed to share her poignant letter with you, it reminded us why we do what we do and how our rescue cats we send around the world change people’s lives.

“I had cats before but this one had such a personality that she still had a pull factor in her old age, the vet she was a frequent visitor of noticed it as well, very gentle, placid and cheeky.
The stray cat from Megala Chorafia had chosen us in July 2015, as you recall we certainly had no intention to have a pet but for three weeks she spent her time with Ken. Although we never fed her, when we put insect screens on the window she used to crash through them to get in.
For one year and half she spent her entire day on the window sill on a cushion in Ken’s study and it comforted him enormously because he was on his own when I went to work.

Later she was like a canary in a mine, we knew when Ken would have a health crisis as she would go away from him. Later when we needed two live-in carers she created a bound between us all, and released a lot of stress.
Kennette was a companion of my husband Ken who had dementia, for one year she was his pride and joy after he could not remember. Kennette was much loved and doted on but gave this love back in abundance, I am sending you a picture of him beaming with joy holding his first ever pet” 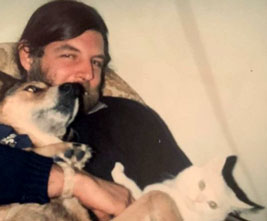